Within its workshops located in Crewe, England, Bentley hand assembles its largest engine, the 6.75 litre version that powers, the luxurious Arnage limousines. In homage to this know-how that is unique in the world, Breitling has created a chronograph named Bentley 6.75, a timepiece symbolising the perfect alliance between tradition and performance, as does the engine after which it is named. In addition to the chronograph mechanism, the Bentley 6.75 is equipped with a “large aperture” calendar showing the date in a highly readable manner through two separate tens and units indicators. Assembly of this sophisticated mechanism is governed by an extreme concern for reliability and precision, as is confirmed by the much-coveted COSC chronometer certification. Whether in the case design or the dial workmanship, technical accomplishments go hand in hand with superlative aesthetic refinement. The bezel is adorned with the elegant knurled motif characteristic of most Breitling for Bentley models. The Bentley 6.75 chronograph comes in a choice of steel or yellow gold. For the most demanding collectors, Breitling has also manufactured a limited edition in rose gold.

Below is a detailed look at Breitling’s model K1336212A576 from Breitling for Bentley watch family, including the price, case details and movement features. 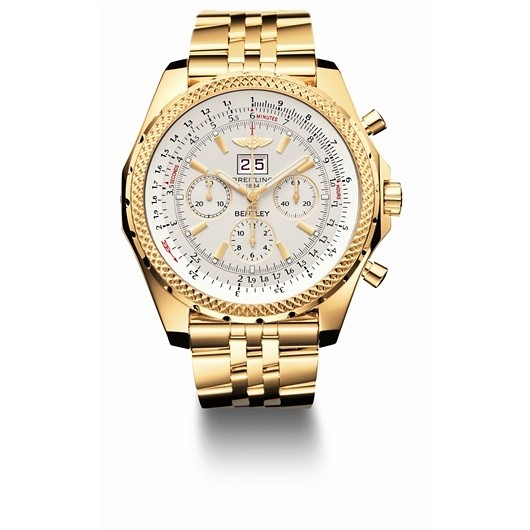 The yellow gold case measures 48.7mm in diameter and roughly 15.6mm thick, with 24mm lug width. The round case is paired with a silver color dial with stick-shaped hands, and a stick / dot hour markers and minute track, covered by a sapphire glass. Breitling’s Breitling for Bentley model K1336212A576 is water resistant up to 100 meters (328 ft). A solid caseback is over the back of the watch case.

The Breitling for Bentley K1336212A576 movement is a powered by caliber 44B made by Breitling. The 38-jewel automatic movement is 25.6mm in diameter. Its balance wheel oscillates at 28800 semi-oscillations per hour or 4 Hz. This movement offers a 42-hour power reserve.

How much does the Breitling’s Breitling for Bentley K1336212A576 cost? This watch was introduced in 2005 and has been in Breitling’s collection for around . This watch is not a limited release. As with most luxury watches, the price of depends on the availability and demand.