GALACTIC 32 Building on its resolutely technical vocation, Breitling distinguishes itself by its original interpretation of the feminine vision of time. For the brand with the winged B, a ladies’ watch must combine performance and elegance, reliability and aesthetic refinement. The Galactic 32 is a perfect example. The feminine and decidedly sophisticated Galactic 32 expresses the ultimate in luxury, embodied in its exquisitely crafted dial. This wealth of design and finishing touches is further enhanced by the wide variety of metals, dial colors and types of straps and bracelets. REF. B71356L2.BA11.406X

Below is a detailed look at Breitling’s model B71356L2.BA11.406X from Galactic watch family, including the price, case details and movement features. 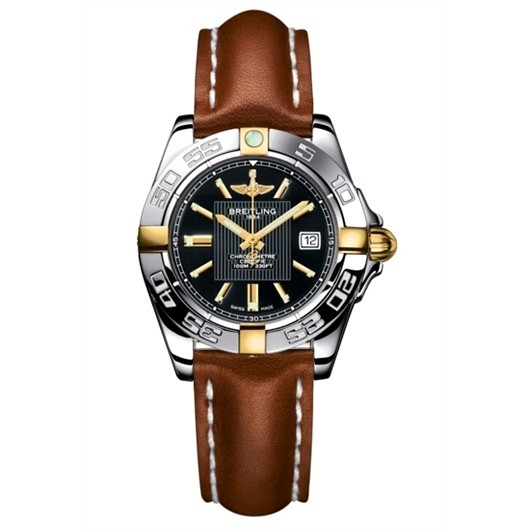 The stainless steel, yellow gold case measures 32mm in diameter and roughly mm thick. The round case is paired with a black color dial with stick-shaped hands, and a stick / dot hour markers and minute track, covered by a sapphire glass. Breitling’s Galactic model B71356L2.BA11.406X is water resistant up to 100 meters (328 ft). A solid caseback is over the back of the watch case.

The Galactic B71356L2.BA11.406X movement is a powered by caliber B71 made by Breitling. The N/A-jewel quartz movement is mm in diameter. Its balance wheel oscillates at N/A semi-oscillations per hour or N/A Hz. This movement offers a 26280-hour power reserve.

How much does the Breitling’s Galactic B71356L2.BA11.406X cost? This watch was introduced in 2010 and has been in Breitling’s collection for around . This watch is not a limited release. As with most luxury watches, the price of depends on the availability and demand.