The watch „Friedrich August I“ delights the mind through its artistic design. The striking gold case offers exquisite housing for the fine mechanical movement and the sapphire glass bottom unveils a fascinating view. Hands crafted from pure gold deploy their beauty on the enamelled tripartite dial. The elegant Arabic numerals are framed by a red minute indicator. The present example has a white gold case paired with a enamel white dial and Louis XV hands.

Below is a detailed look at Lang & Heyne’s model FA1 Variation 2 from Friedrich August 1. watch family, including the price, case details and movement features. 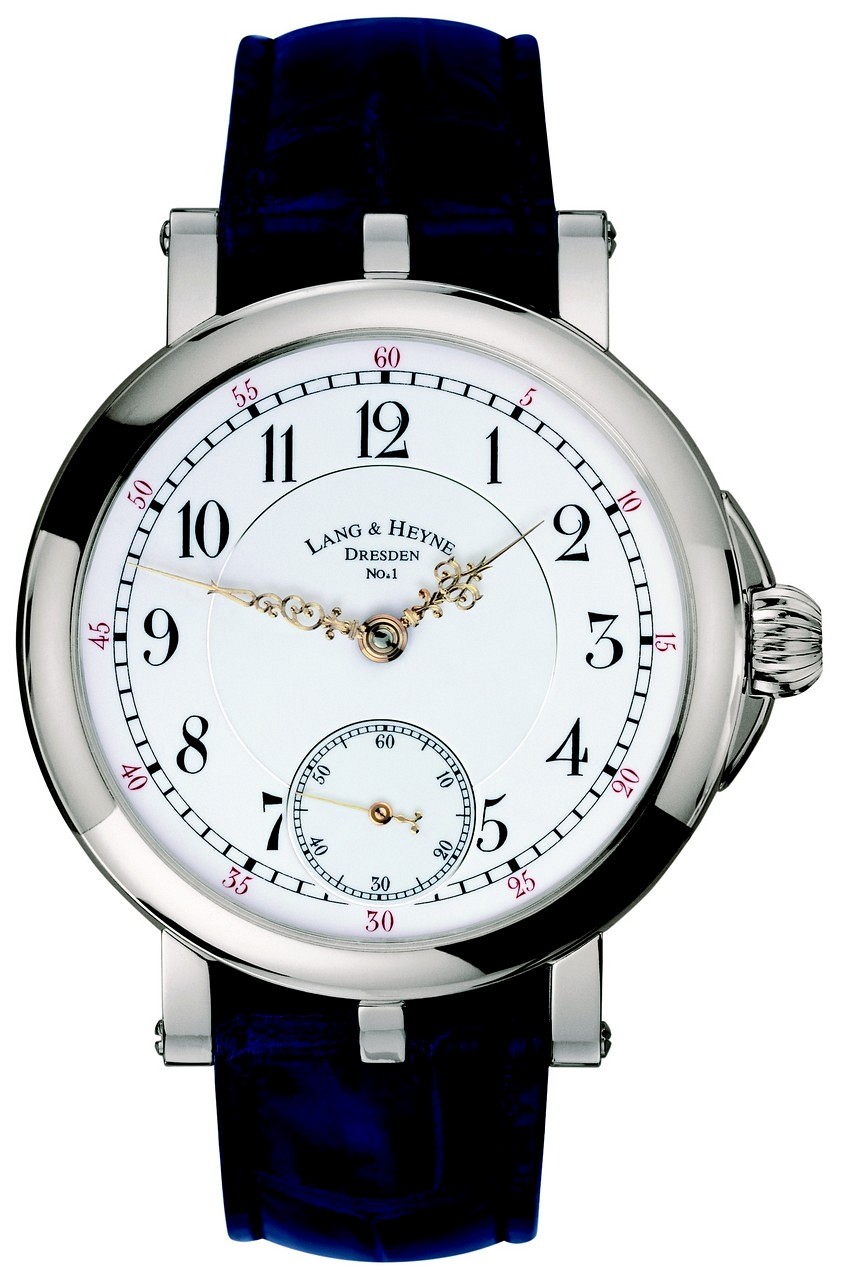 Lang & Heyne’s Friedrich August 1. (FA1 Variation 2) was originally released in N/A. This watch features a hand-wound movement beating at a frequency of 18000 bph (2.5 Hz) to provide a 46-hour power reserve when fully wound.

The white gold case measures 43.5mm in diameter and roughly mm thick. The round case is paired with a white color dial with louis xv-shaped hands, and a roman numerals hour markers and minute track, covered by a sapphire glass. Lang & Heyne’s Friedrich August 1. model FA1 Variation 2 water resistance is not available. This does not mean this watch is not water resistant. A display caseback is over the back of the watch case.

The Friedrich August 1. FA1 Variation 2 movement is a powered by caliber L&H Caliber 1 made by Lang & Heyne. The 19-jewel hand-wound movement is 36.6mm in diameter. Its balance wheel oscillates at 18000 semi-oscillations per hour or 2.5 Hz. This movement offers a 46-hour power reserve.

How much does the Lang & Heyne’s Friedrich August 1. FA1 Variation 2 cost? This watch was introduced in N/A and has been in Lang & Heyne’s collection for around . This watch is not a limited release. As with most luxury watches, the price of depends on the availability and demand.

Marco Lang is a fifth generation watchmaker. His father’s workshop in Dresden was both his playground as well as his source of inspiration for his later creations. After five years of watchmaking school Lang began restoring and constructing movements, mainly high-precision clocks. After creating his ‘Masterpiece’ with the accompanying letter, he began his own workshop at age 27. His main area … of expertise was Saxonian pocketwatches from the 18th and 19th century. In 2001 Lang began his own brand, called Lang & Heyne, wherein he is the head watchmaker, while a friend takes care of the entrepreneurial side of business. Today his base is a villa in Dresden, where he builds watches with a team of some 10 young watchmakers.