Set for release in mid 2017, the IWC Pilot’s Watch Mark XVIII ref. IW3270-06 features a titanium case and a ‘Heritage’ dial, similar to the earlier Big Pilot Heritage 48 en 55. It is fitted with a brown Santoni calf strap.

Below is a detailed look at IWC’s model IW3270-06 from Pilot watch family, including the price, case details and movement features. 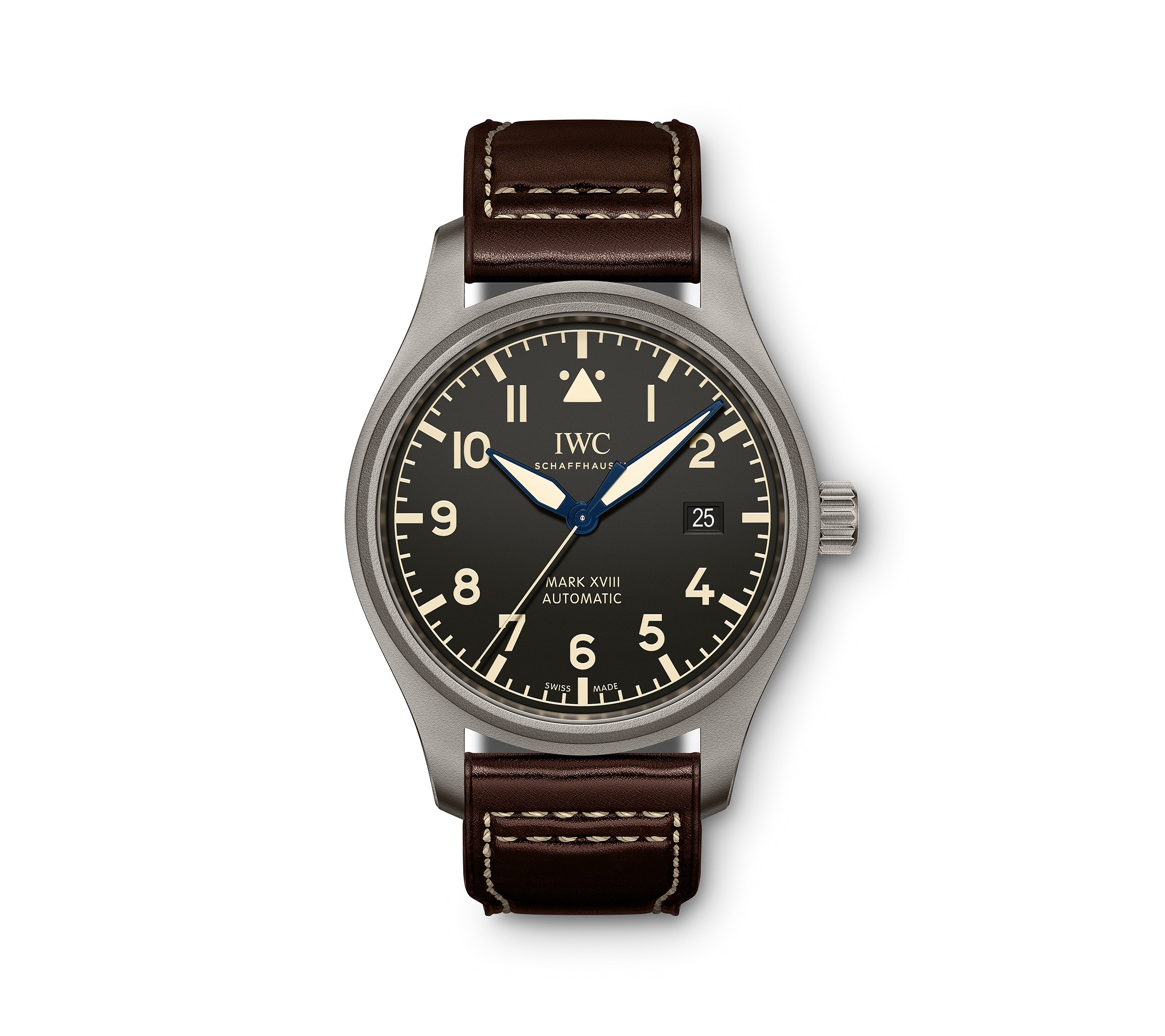 The titanium case measures 40mm in diameter and roughly 10.8mm thick, with 20mm lug width. The round case is paired with a black color dial with alpha-shaped hands, and a arabic numerals hour markers and minute track, covered by a sapphire glass. IWC’s Pilot model IW3270-06 is water resistant up to 60 meters (197 ft). A solid caseback is over the back of the watch case.

The Pilot IW3270-06 movement is a powered by caliber 35111 made by IWC. The 25-jewel automatic movement is 25.6mm in diameter. Its balance wheel oscillates at 28800 semi-oscillations per hour or 4 Hz. This movement offers a 42-hour power reserve.

How much does the IWC’s Pilot IW3270-06 cost? This watch was introduced in 2017 and has been in IWC’s collection for around . This watch is not a limited release. As with most luxury watches, the price of depends on the availability and demand.

IWC is based in Schaffhausen, Switzerland, and was founded in 1868. Its signature lines are the Pilot’s Watches and the Portugieser, while other famous collections are the Aquatimer, Portofino and the Da Vinci. Many of IWC’s designs display a industrial type of beauty not often found in Swiss watchmaking. The same goes for its movements; while of very high standards, they are finished with an … engineers touch rather than that of an artist. One could very well say that IWC’s approach to watchmaking is more German in nature compared to many of its competitors; the ‘form follows function’ adagio is one held in high esteem in Schaffhausen. Notable watches and innovations created by IWC in the past include the digital ‘Pallweber’ pocket watch, the late 1930’s Portugieser, the 1985 Da Vinci with Kurt Klaus perpetual module, the split-seconds mechanism as designed by Richard Habring and the ceramic Da Vinci and Flieger 3705 – introduced many years before the material became fashionable. IWC also pioneered the use of titanium in wristwatches. In recent years, IWC has had a strong focus on in-house movements with prices rising accordingly. IWC is part of the Richemont group.

The Basics The IWC GST Chronograph Automatic was introduced in 1999. This sporty chronograph was available in either gold, steel or titanium -all with matching...
Read more

The Basics The Big Pilot’s Watch TOP GUN Miramar (Ref. 5019) is equipped with the largest automatic movement from IWC, with a power reserve of...
Read more

The Basics IWC’s designers took their inspiration for the Ingenieur Double Chronograph Titanium from materials typically used in Formula 1: titanium, ceramic and rubber. The...
Read more

The Basics The Portofino Automatic reference IW3565-18 was introduced in 2018 in celebration of IWC's 150th anniversary. This limited edition of 2000 pieces features a...
Read more