The Breitling Avenger Blackbird 44 Diamondworks reference V17311AU|I526|134S was introduced at BaselWorld 2016. It features a black titanium case with bezel and lugs set with black diamonds. It is powered the self-winding caliber 17.

Below is a detailed look at Breitling’s model V17311AU.I526.134S from Avenger watch family, including the price, case details and movement features. 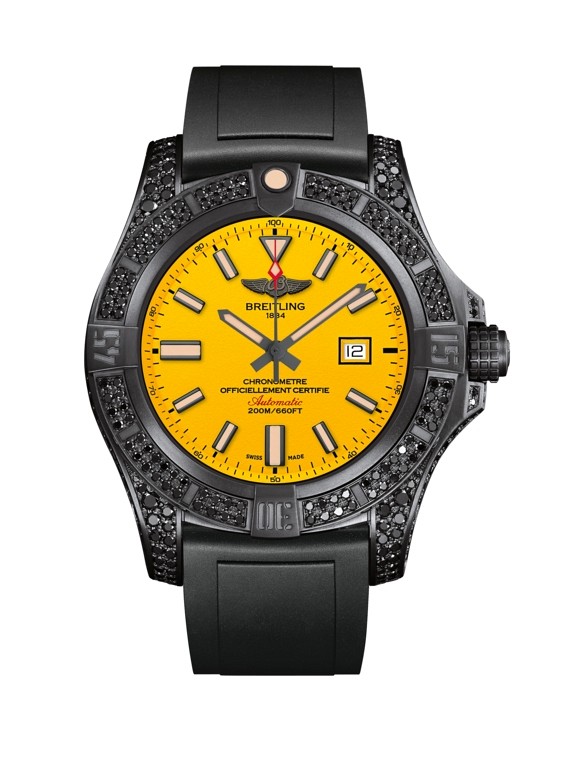 The titanium case measures 44mm in diameter and roughly 12.7mm thick, with 22mm lug width. The round case is paired with a yellow color dial with stick-shaped hands, and a stick / dot hour markers and minute track, covered by a sapphire glass. Breitling’s Avenger model V17311AU.I526.134S water resistance is not available. This does not mean this watch is not water resistant. A solid caseback is over the back of the watch case.

The Avenger V17311AU.I526.134S movement is a powered by caliber B17 made by Breitling. The 25-jewel automatic movement is 25.6mm in diameter. Its balance wheel oscillates at 28800 semi-oscillations per hour or 4 Hz. This movement offers a -hour power reserve.

How much does the Breitling’s Avenger V17311AU.I526.134S cost? This watch was introduced in 2016 and has been in Breitling’s collection for around . This watch is not a limited release. As with most luxury watches, the price of depends on the availability and demand.