In 1946, the legendary Bentley Mark VI emerged from the company factories in Crewe. It was the first Bentley ever produced in these workshops, where the world’s most prestigious automobiles are still assembled to this day. Sixty years later, Breitling has revived the legend by presenting the Mark VI special series, a chronograph conceived in the spirit of tradition and performance characteristic of the entire Breitling for Bentley collection. In tribute to the heritage of excellence embodied by the famous limousine, this timepiece incorporates all the signature design features of the British manufacturer, such as the knurled finishing on the bezel, inspired by the Bentley controls. Merging know-how and elegance, it is graced with hour-markers cut from mother-of-pearl – a delicate work of fine craftsmanship – and the caseback is decorated with the Bentley emblem of the era, shown in relief. Created for individuals who are passionate about fine mechanical engineering, it is equipped with an exclusive Breitling for Bentley movement, selfwinding Calibre 26B with a 60-minute totalizer in the centre. This sophisticated mechanism is assembled in keeping with an extreme concern for reliability and precision, vouched for by the much-coveted COSC chronometer certification. The Mark VI comes in a steel version with platinum bezel as well as in a limited series in red gold.

Below is a detailed look at Breitling’s model P2636212.C707 from Breitling for Bentley watch family, including the price, case details and movement features. 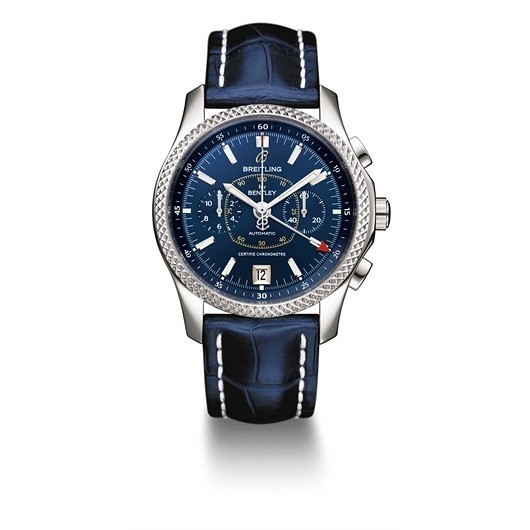 The stainless steel, platinum case measures 42mm in diameter and roughly 16.3mm thick. The round case is paired with a blue color dial with stick-shaped hands, and a stick / dot hour markers and minute track, covered by a sapphire glass. Breitling’s Breitling for Bentley model P2636212.C707 is water resistant up to 100 meters (328 ft). A solid caseback is over the back of the watch case.

The Breitling for Bentley P2636212.C707 movement is a powered by caliber 26B made by Breitling. The 21-jewel automatic movement is 25.6mm in diameter. Its balance wheel oscillates at 28800 semi-oscillations per hour or 4 Hz. This movement offers a 42-hour power reserve.

How much does the Breitling’s Breitling for Bentley P2636212.C707 cost? This watch was introduced in 2006 and has been in Breitling’s collection for around . This watch is not a limited release. As with most luxury watches, the price of depends on the availability and demand.

The Basics Breitling combines style with performance in a distinctive ladies’ model interpreted in many different guises. With a bezel in tungsten carbide, an ultra-hard,...
Read more

The Basics Breitling combines style with performance in a distinctive ladies’ model interpreted in many different guises. With a bezel in tungsten carbide, an ultra-hard,...
Read more

The Basics The Superocean Héritage Chronographe combines a vintage-inspired appearance with excellent performances. Its powerful 46 or 44 mm-diameter steel case that is water-resistant to...
Read more

The Basics Equipped with the first analog-display quartz movement developed by and for Breitling, this sturdy and light titanium instrument is distinguished by its peerless...
Read more

The Basics The Breitling Chronomat 44 is equipped with Caliber 01, the first movement entirely developed and produced by the brand itself. The Chronomat 44...
Read more

The Basics Designed for women wishing to enjoy a blend of refined luxury and uncompromising technical sophistication, the Galactic 36 Automatic stands out by its...
Read more

The Basics Building on its resolutely technical vocation, Breitling distinguishes itself by its original interpretation of the feminine vision of time. For the brand with...
Read more

The Basics Designed for women wishing to enjoy a blend of refined luxury and uncompromising technical sophistication, the Galactic 36 Automatic stands out by its...
Read more