In launching the Navitimer in 1952, Breitling gave pilots a genuine wrist instrument. Ingenious and efficient, this chronograph is endowed with a built-in “navigator computer”, a circular slide rule capable of performing all calculations a flight plan requires. The Navitimer thus became the official watch of the AOPA (Aircraft Owners and Pilots Association), the world’s largest grouping of pilots. In its fifty years of existence, the Navitimer has achieved cult object status, thereby joining the select circle of modern, ultra-functional and timeless objects that have made their mark on the 20th century. Since the famous “806” model in 1952, the Navitimer has found its way through the years unchanged in either form and spirit. Continuously produced throughout this period, it is now the world’s oldest chronograph. REF. K2332212/B634

Below is a detailed look at Breitling’s model K2332212.B634 from Navitimer watch family, including the price, case details and movement features. 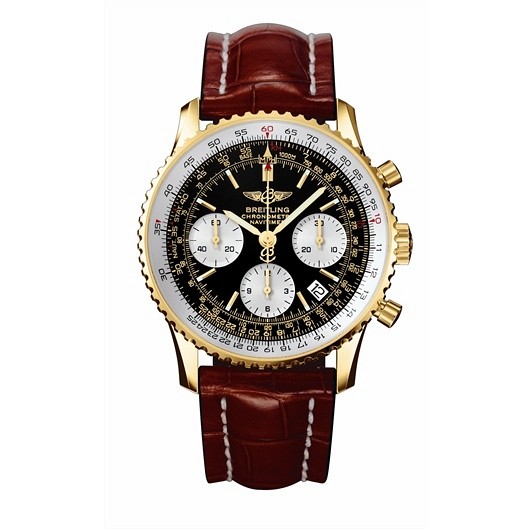 The yellow gold case measures 41.8mm in diameter and roughly 14.6mm thick, with 22mm lug width. The round case is paired with a black color dial with -shaped hands, and a stick / dot hour markers and minute track, covered by a sapphire glass. Breitling’s Navitimer model K2332212.B634 is water resistant up to 30 meters (98 ft). A solid caseback is over the back of the watch case.

The Navitimer K2332212.B634 movement is a powered by caliber B23 made by Breitling. The 27-jewel automatic movement is 30mm in diameter. Its balance wheel oscillates at 28800 semi-oscillations per hour or 4 Hz. This movement offers a 42-hour power reserve.

How much does the Breitling’s Navitimer K2332212.B634 cost? This watch was introduced in 2003 and has been in Breitling’s collection for around . This watch is not a limited release. As with most luxury watches, the price of depends on the availability and demand.