Initially developed for the armed forces, Colt Quartz was the original model behind the entire Colt range and its reputation for reliability, precision and functionality. It has retained the essential characteristics from this military past, including its sturdy construction ensuring effective protection against shocks, or its water resistance guaranteed to 1,650 feet (500 meters). Placing functionality above else, the Colt is equipped with an ergonomic screw-locked crown that is particularly easy to handle. It offers exemplary readability thanks to the contrast between the oversized hands and the dial. On an aesthetic level, the Colt Quartz is distinguished by the finishing of its case, featuring lines that are highlighted by the contrast between polished and satin-brushed surface. Its high-precision SuperQuartz™ movement is powered by an eight-year battery, representing an additional guarantee of reliability for the sturdiest of the Breitling watches. REF. A7438010/G598/428X

Below is a detailed look at Breitling’s model A7438010.G598.428X from Colt watch family, including the price, case details and movement features. 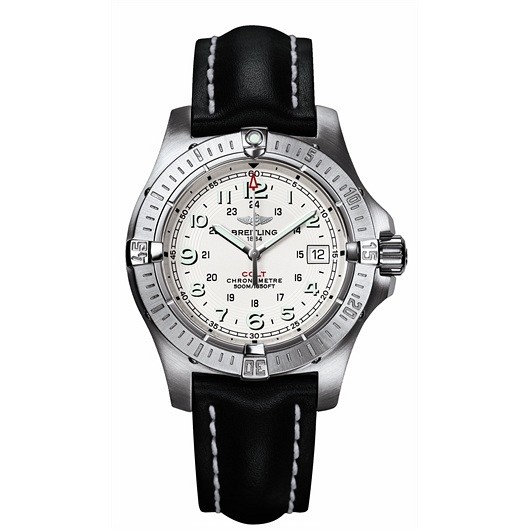 The stainless steel case measures 41.1mm in diameter and roughly 13.6mm thick, with 20mm lug width. The round case is paired with a silver color dial with stick-shaped hands, and a arabic numerals hour markers and minute track, covered by a sapphire glass. Breitling’s Colt model A7438010.G598.428X is water resistant up to 500 meters (1640 ft). A solid caseback is over the back of the watch case.

The Colt A7438010.G598.428X movement is a powered by caliber B74 made by Breitling. The 7-jewel quartz movement is 25.6mm in diameter. Its balance wheel oscillates at N/A semi-oscillations per hour or N/A Hz. This movement offers a 26280-hour power reserve.

How much does the Breitling’s Colt A7438010.G598.428X cost? This watch was introduced in 2006 and has been in Breitling’s collection for around . This watch is not a limited release. As with most luxury watches, the price of depends on the availability and demand.