Set of three timepieces; 1LCAP.S06A.C111A: “Cannons Ablaze, Lord Nelson’s Flagship Takes On The French Fleet” (pictured) 1LCAP.S05A.C111A: “HMS Victory At Sea, Lit By Rays Of Sunshine Piercing The Clouds” 1LCAP.S07A.C111A “Where The Battle Was Won: One Of The Cannons Deck On HMS Victory” Arnold & Son’s own master engraver created the exquisite HMS Victory Set dials, which are then duplicated in silver for the series. Hand-engraving is a traditional art form that involves the use of hardened steel tools called burins in combination with other special tools. These create cuts, lines and texturing that build up entire images or, as in the case of this exclusive set of timepieces, perfectly sculpted scenes of the HMS Victory with a breathtaking richness of detail. The scenes in the HMS Victory Set give us three different views of the vessel: the first, resplendent in shafts of sunlight breaking through the clouds; the second, with guns ablaze as she rakes the French fleet; and the third, an interior of the ship, on one of the gun decks. The three-dimensional nature of these hand-engraved dials is accentuated by the engraver who then individually hand-tarnishes each final duplicated silver dial to provide all a spectacular illustration of this extraordinary ship with illusion of depth that contrasts starkly with the ultra-slim case.

Below is a detailed look at Arnold & Son’s model 1LCAP.S06A.C111A from Royal Collection watch family, including the price, case details and movement features. 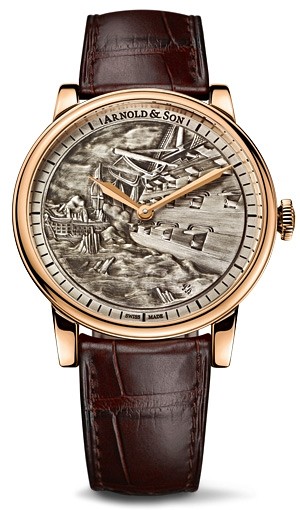 Arnold & Son’s HMS1 Victory (1LCAP.S06A.C111A) was originally released in N/A. This watch features a hand-wound movement beating at a frequency of 21600 bph ( 3 Hz) to provide a 90-hour power reserve when fully wound.

The rose gold case measures 40mm in diameter and roughly mm thick. The round case is paired with a silver color dial with -shaped hands, and a stick / dot hour markers and minute track, covered by a sapphire glass. Arnold & Son’s Royal Collection model 1LCAP.S06A.C111A is water resistant up to 30 meters (98 ft). A display caseback is over the back of the watch case.

The Royal Collection 1LCAP.S06A.C111A movement is a powered by caliber A&S1001 made by Arnold & Son. The 21-jewel hand-wound movement is 30mm in diameter. Its balance wheel oscillates at 21,600 semi-oscillations per hour or 3 Hz. This movement offers a 90-hour power reserve.

How much does the Arnold & Son’s Royal Collection 1LCAP.S06A.C111A cost? This watch was introduced in N/A and has been in Arnold & Son’s collection for around . This watch is a limited edition with just 28 pieces released. As with most luxury watches, the price of depends on the availability and demand.