To mark the Chinese Year of the Dragon, Arnold & Son announces the launch of the latest addition to the HMS1 collection, the HMS1 Dragon Limited Edition in rose gold with a magnificent gold dragon appliqué. In Chinese mythology the dragon is a divine creature signifying power and good fortune, and is the free spirit of the zodiac. As a tribute to the Year of the Dragon, which occurs once every twelve years in the Chinese calendar and begins on 23 January 2012, Arnold & Son has created a special edition of the HMS1 in rose gold featuring an exquisitely crafted gold appliqué of a traditional Chinese dragon on a black lacquered dial. But this is no ordinary dragon. The figure on the dial was inspired by one of the dragons depicted on the Nine-Dragon Wall in Beihai Park, an imperial garden to the northwest of the Forbidden City in Beijing. The Wall was completed in 1756, which perhaps significantly was just eight years before John Arnold opened his clockmaking workshop in London’s Strand in 1764. It just so happens that the number eight is of particular importance in many Asian cultures. The exquisite gold dragon appliqué is created by a craftsman selected specially for his expertise in hand-engraving, a traditional art form that involves the use of hardened steel tools called burins in combination with other special tools. These create cuts, lines and texturing that build up entire images or, as in the case of the HMS1 Dragon Special Edition, a perfectly sculpted figure in solid 22-carat gold with a breathtaking richness of detail, which is then duplicated for the series. The three-dimensional nature of the dragon appliqué also provides a spectacular illusion of depth that contrasts starkly with the HMS1’s ultra-slim case.

Below is a detailed look at Arnold & Son’s model 1LCAP.B02A.C111A from Royal Collection watch family, including the price, case details and movement features. 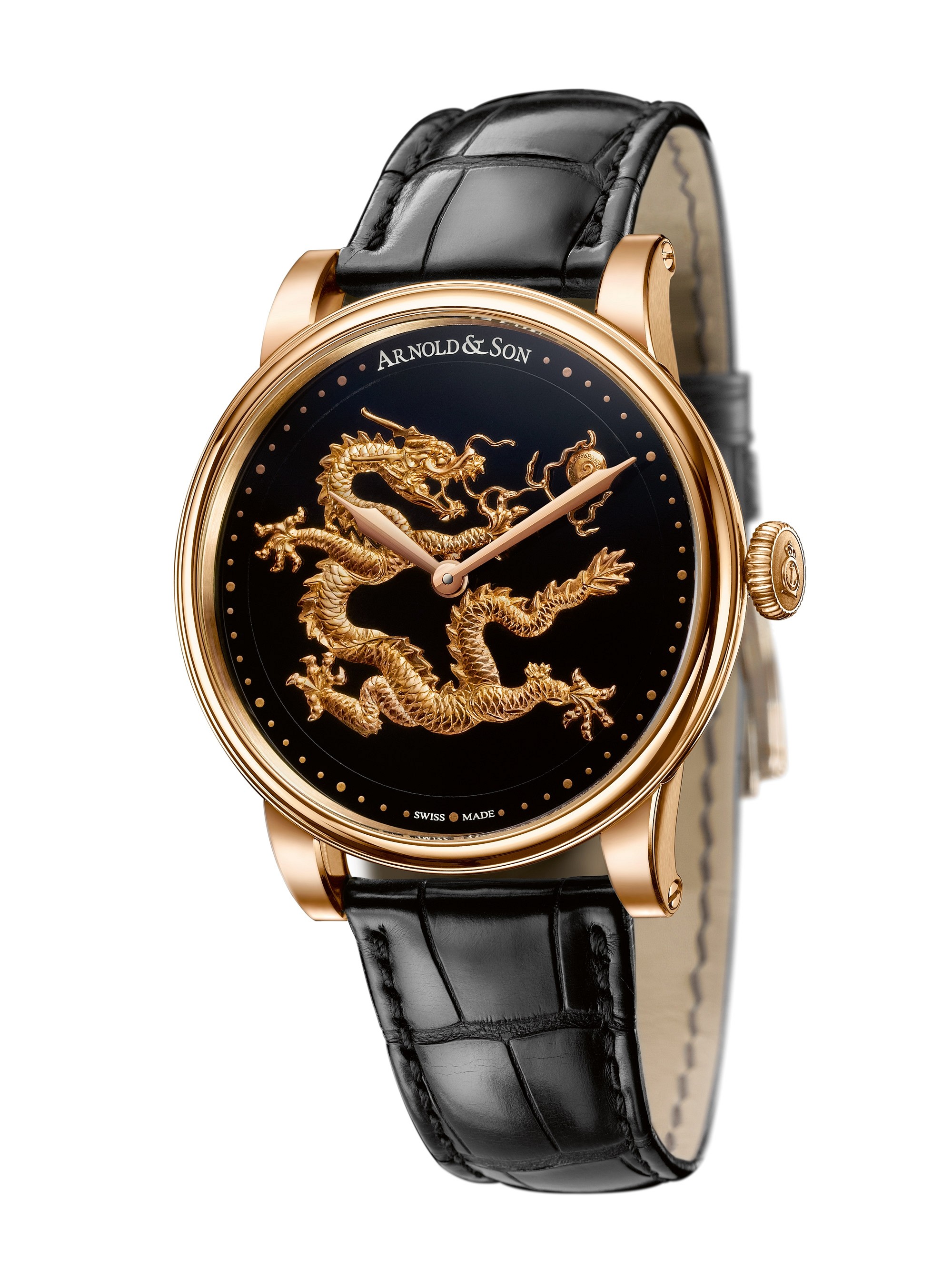 Arnold & Son’s HMS1 Dragon (1LCAP.B02A.C111A) was originally released in N/A. This watch features a hand-wound movement beating at a frequency of 21600 bph ( 3 Hz) to provide a 90-hour power reserve when fully wound.

The rose gold case measures 40mm in diameter and roughly mm thick. The round case is paired with a black color dial with -shaped hands, and a stick / dot hour markers and minute track, covered by a sapphire glass. Arnold & Son’s Royal Collection model 1LCAP.B02A.C111A is water resistant up to 30 meters (98 ft). A display caseback is over the back of the watch case.

The Royal Collection 1LCAP.B02A.C111A movement is a powered by caliber A&S1001 CdG made by Arnold & Son. The 21-jewel hand-wound movement is 30mm in diameter. Its balance wheel oscillates at 21,600 semi-oscillations per hour or 3 Hz. This movement offers a 90-hour power reserve.

How much does the Arnold & Son’s Royal Collection 1LCAP.B02A.C111A cost? This watch was introduced in N/A and has been in Arnold & Son’s collection for around . This watch is a limited edition with just 50 pieces released. As with most luxury watches, the price of depends on the availability and demand.