The DSTB is part of the Instrument Collection and, like every other model from Arnold & Son, features an in-house mechanical movement. The true beat seconds is a traditional complication of Arnold & Son, and this watch pays tribute to the watches produced by John Arnold during the second half of his career, when he and his son were the first to develop marine chronometers that could be produced in quantity at reasonable prices. Those technically superior, widely distributed chronometers reflected Arnold & Son’s commitment to exceptional precision and solved the problem of determining longitude at sea. The newly developed automatic movement showcases the true beat seconds’ mechanism entirely on the dial side. Not just the hands, but also the lever, wheels and three rose-gold treated true beat seconds bridges are located in all their beauty on the dial side. Making the watch even more alluring is the fact that the true beat seconds lever is shaped like an anchor – paying homage to Arnold’s maritime achievements. The true beat seconds are superbly indicated via a large sapphire dial that occupies the top left portion of the dial at 11 o’clock. At the 4 o’clock position, a white lacquered domed subdial indicates the hours and the minutes via blued hands. These generously proportioned, overlapping indications translate into a stunning three-dimensional dial.

Below is a detailed look at Arnold & Son’s model 1ATAR.L01A.C120A from Instrument Collection watch family, including the price, case details and movement features. 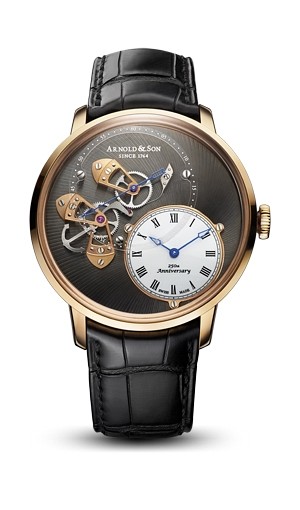 Arnold & Son’s DSTB (1ATAR.L01A.C120A) was originally released in N/A. This watch features a automatic movement beating at a frequency of 28800 bph ( 4 Hz) to provide a 50-hour power reserve when fully wound.

The red gold case measures 43.5mm in diameter and roughly mm thick. The round case is paired with a white color dial with -shaped hands, and a roman numerals hour markers and minute track, covered by a sapphire glass. Arnold & Son’s Instrument Collection model 1ATAR.L01A.C120A is water resistant up to 30 meters (98 ft). A display caseback is over the back of the watch case.

The Instrument Collection 1ATAR.L01A.C120A movement is a powered by caliber A&S6003 made by Arnold & Son. The 32-jewel automatic movement is 38mm in diameter. Its balance wheel oscillates at 28,800 semi-oscillations per hour or 4 Hz. This movement offers a 50-hour power reserve.

How much does the Arnold & Son’s Instrument Collection 1ATAR.L01A.C120A cost? This watch was introduced in N/A and has been in Arnold & Son’s collection for around . This watch is a limited edition with just 50 pieces released. As with most luxury watches, the price of depends on the availability and demand.