A mechanical movement has three enemies: moisture, dust and shocks. The first two have hardly been an issue since the introduction of water-resistant and water-proof cases starting in the 1930’s, and systems like Incabloc and the more recent Nivachoc have made movements much more shock-resistant. Many watchmakers  however add a fourth category to this list: magnetic fields. While magnetized movements were previously a problem of professionals who encounter high magnetic fields on the job -like doctors, railroad personnel and engineers-, with our ever increasing exposure to electronic devices, magnetism has become a very real danger for others as well. The traditional solution to this problem is to encapsulate the movement in a Faraday’s cage, as Omega did with the 1957 Railmaster, which was resistant to more than 900 gauss and developed especially for railway staff. For the Omega Seamaster Aqua Terra 15’000 Gauss however, Omega decided to spice things up and do it differently. This time the movement is not protected by an extra shield, but it is rather the movement itself which is made invulnerable to magnetic fields. Omega achieved this through the use of selected non-ferrous materials, which resulted in a resistance to magnetic fields of over 15’000 Gauss! In the words of the manufacturer: ‘Even after exposure to a magnetic field greater than 15’000 gauss, the movement still performs at a chronometric level as defined by COSC.’ Since the movement is not protected by an additional container, it can be admired in full view through a see-through caseback. Seamaster ref: 231.10.42.21.01.002

Below is a detailed look at Omega’s model 231.10.42.21.01.002 from Aqua Terra watch family, including the price, case details and movement features. 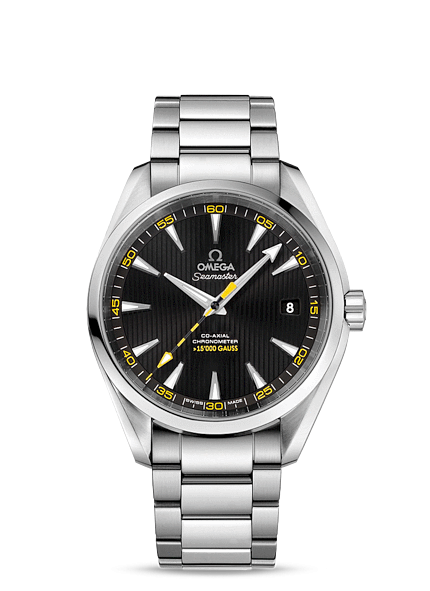 The stainless steel case measures 41.5mm in diameter and roughly mm thick. The round case is paired with a black color dial with arrow-shaped hands, and a stick / dot hour markers and minute track, covered by a sapphire glass. Omega’s Aqua Terra model 231.10.42.21.01.002 is water resistant up to 150 meters (492 ft). A display caseback is over the back of the watch case.

How much does the Omega’s Aqua Terra 231.10.42.21.01.002 cost? This watch was introduced in 2013 and has been in Omega’s collection for around . This watch is not a limited release. As with most luxury watches, the price of depends on the availability and demand.

The Basics When Omega created the Seamaster Aqua Terra it was influenced by some design elements which had characterized some great Omega wristwatches in the...
Read more

The Basics The Seamaster Aqua Terra reference 231.10.39.21.01.001 has a stainless steel case, matching bracelet, and black dial. It is powered by the self-winding caliber...
Read more

The Basics This classic yet robust timepiece represents a tribute to OMEGA’s rich maritime heritage. The dramatic and easily-recognisable dial design of the OMEGA Seamaster...
Read more