Montblanc Star Chronograph UTC Automatic Special “Carpe Diem” Modern mountaineering was born in the late 18th century, when triumphant alpinists first stood atop the summit of Mont Blanc, Europe’s highest peak. Another era was inaugurated almost simultaneously more than 1,000 kilometres to the north in Greenwich near London, when Greenwich Mean Time (GMT) defined a new fixed point for coordinating time measurement around the globe. The Montblanc Star Chronograph UTC Automatic celebrates both developments. Fine guilloché on its dial emanates from Montblanc’s emblem and evokes the power of the Alps’ most spectacular mountain to radiate its charisma throughout the world. An arrow on the hand for the second time zone points to the relevant time on the 24-hour scale on the flange. In this Special Edition the blue hands are combined with a longer, slender bright red seconds-hand. The seconds-hand with its skeletonised distinctive Montblanc emblem as a counterweight reminds us, with each glance, that our lives occour here and now: Carpe Diem Reference 110704

Below is a detailed look at Montblanc’s model 110704 from Star watch family, including the price, case details and movement features. 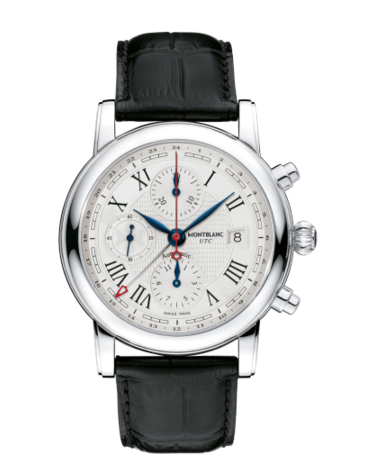 The stainless steel case measures 42mm in diameter and roughly 14.7mm thick, with 22mm lug width. The round case is paired with a silver color dial with feuille-shaped hands, and a roman numerals hour markers and minute track, covered by a sapphire glass. Montblanc’s Star model 110704 is water resistant up to 30 meters (98 ft). A display caseback is over the back of the watch case.

The Star 110704 movement is a powered by caliber MB 25.03 made by Montblanc. The 25-jewel automatic movement is 30mm in diameter. Its balance wheel oscillates at 28,800 semi-oscillations per hour or 4 Hz. This movement offers a 42-hour power reserve.

How much does the Montblanc’s Star 110704 cost? This watch was introduced in N/A and has been in Montblanc’s collection for around . This watch is not a limited release. As with most luxury watches, the price of depends on the availability and demand.

Claus-Johannes Voss, Alfred Nehemias, and August Eberstein founded the company now known as Montblanc as a pen maker in Hamburg, Germany, in 1906. Today, as a member of the Richemont group, Montblanc produces a range of luxury goods under the leadership of CEO Jerome Lambert.