The Casio G-Shock GA-110 mixes an over-sized resin case with an analog-digital display. The hands are designed to mimic parts found in mechanical watches. It is available in a wide range of variations, the present version having a black resin case and a negative display.

Below is a detailed look at Casio’s model GA-110-1B from G-Shock GA-110 watch family, including the price, case details and movement features. 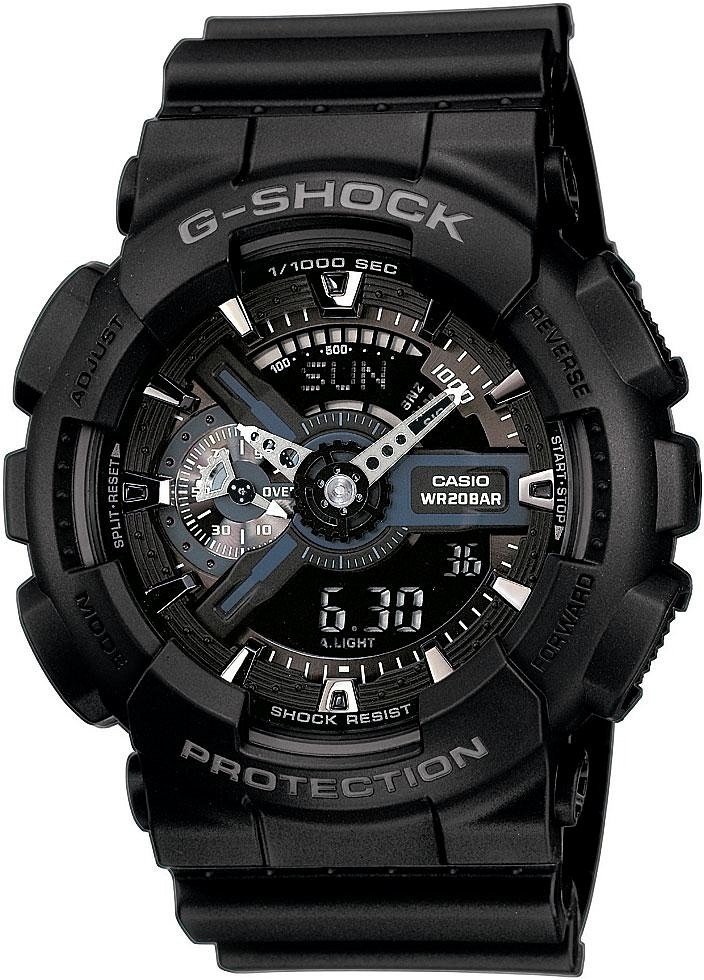 Casio’s GA-110-1B Black (GA-110-1B) was originally released in N/A. This watch features a quartz movement beating at a frequency of N/A ( N/A Hz) to provide a -hour power reserve when fully wound.

The resin case measures 55mm in diameter and roughly 16.9mm thick. The round case is paired with a black color dial with proprietary-shaped hands, and a stick / dot hour markers and minute track, covered by a mineral glass. Casio’s G-Shock GA-110 model GA-110-1B is water resistant up to 200 meters (656 ft). A solid caseback is over the back of the watch case.

The G-Shock GA-110 GA-110-1B movement is a powered by caliber 5146 made by Casio. The N/A-jewel quartz movement is mm in diameter. Its balance wheel oscillates at N/A semi-oscillations per hour or N/A Hz. This movement offers a -hour power reserve.

How much does the Casio’s G-Shock GA-110 GA-110-1B cost? This watch was introduced in N/A and has been in Casio’s collection for around . This watch is not a limited release. As with most luxury watches, the price of depends on the availability and demand.

In 1946, Tadao Kashio founded a company called Kashio Seisakujo, in Mitaka, Tokyo. One of his earliest innovations was some kind of ring that held a cigarette, allowing its wearer to smoke the cigarette until its very end – with Japan impoverished from WWII, this innovation was quite a success. Tadao Kashio, now joined by his brothers Toshio, Kazuo and Yukio, would go on and invest the proceeds … in the development of electronic calculators, of which the first prototype was shown by in 1954. In 1957 the first commercially available electronic calculator was introduced by the company, at which time Casio Computer Co., Ltd. is established.

The Basics The MR-G is the most high-end of all Casio collections. The present MRGG1000DC-1A features an elaborate titanium case with DLC-coated elements, finished to...
Read more

The Basics The MR-G is the most high-end of all Casio collections. The present MRG-G1000D-1ADR features an elaborate titanium case with a DLC-coated bezel, finished...
Read more

The Basics The Casio G-Shock GA-110 mixes an over-sized resin case with an analog-digital display. The hands are designed to mimic parts found in mechanical...
Read more

The Basics The Casio G-Shock GA-110 mixes an over-sized resin case with an analog-digital display. The hands are designed to mimic parts found in mechanical...
Read more